In 2020, West African acquired the Toega Gold Project, 14km from its existing Sanbrado gold operation in Burkina Faso. The project has an existing resource of 1.1 million ounces of gold at 2.1 g/t Au (non-JORC) and excellent exploration upside.

Toega is expected to increase Sanbrado’s production profile and mine life, and West African aims to bring it into the Sanbrado mine plan within three years. West African is planning a comprehensive feasibility study and permitting work program. Infill drilling at Toega is expected to commence in late Q3 2020, conditions permitting, with other technical activities being conducted in parallel or commencing over the next two years.

It is anticipated that Toega material may displace some lower grade ore from the M5 open pit after the higher grade in the early years of the operation, thereby potentially increasing the Sanbrado production profile and extending the mine life past 10 years.

The Sartenga copper-gold-molybdenum project is a large tonnage porphyry system which is unique in the Biriman rocks of West Africa. The Inferred Mineral Resource contains 174,000t copper and 651,000oz gold. The dominant sulphide is bornite and therefore mineralisation has the potential to create a high-grade copper-gold concentrate. The project is close to infrastructure including rail to port less than 40km from the project.

The Company acquired a 100% interest in the Sartenga Permit in 2012.

The mineralised zone at Sartenga is contained within a southwest-northeast trending envelope parallel to the regional shear direction and is associated with a steeply north west dipping shear corridor at the contact between meta-sediments to the north west, and silicified intermediate porphyritic diorites to the southeast. The metasediments are represented by greenschist facies quartz-sericite schists. Drilling has shown that the contact zone between the mafic-intermediate rocks and the metasediments is complex and strongly overprinted by shearing and a series of alteration assemblages throughout. The occurrence of the mineralisation suggests a process of extensive alteration of wall rock lithologies resulting from proximity to the mineralising fluid pathways within the shear corridor. 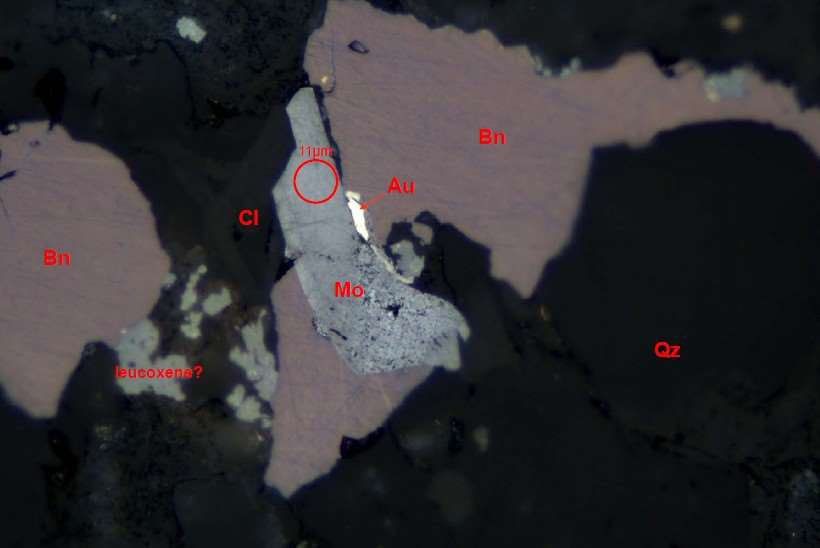 In June 2013, WAF reported a maiden JORC (2004) Inferred Resource Estimate for the Sartenga Copper Gold Project. The Mineral Resource was independently calculated by Ravensgate Mineral Industry Resource Consultants and is discussed in the following sections.

The block model was constructed using 10mX, 25mY, and 5mZ blocks (East, North, Elev) and utilised a zone and zone percent coding to accurately represent material volumes. The model was rotated 45 degrees to parallel the main strike of mineralisation.

The resource extends over an area of approximately 1,600m of strike, 800m width and is interpreted to a depth of between 150 and 300m below surface. As this is a maiden resource for the prospect no scoping study assessment has been completed. However given the grade and location of the deposit it is assumed the most likely development scenario for the deposit would be as an open pit. Based on this a 0.45% CuEq* cut-off is considered to be appropriate for reporting purposes at this stage.

Preliminary metallurgical test work has been carried out on a composite sample of Sartenga primary ore with a head grade of 0.23% Cu and 0.43g/t Au, at a relatively coarse primary grind size of 106 microns. Flotation rougher recovery of 97.9% was returned for gold, while a recovery of 96.1% was recorded for copper. These very high rougher recoveries indicate that final copper and gold recovery levels into a commercial grade concentrate will also be quite high, potentially in excess of 90%. Future metallurgical work will be directed towards further rougher flotation tests at coarser grind sizes and cleaner flotation test work in advance of producing a commercial grade copper-gold concentrate from Sartenga primary ore.

Also, indicative Bond Ball Mill Work Index (BBMWI) for Sartenga primary ore is in the order of 10kwh/t classifying primary ore as soft. This is very positive for the potential economics for the project indicating lower milling and power costs, per tonne of ore, in comparison to other gold projects in the West African region, which are generally in the order of 15 kwh/t to 20 kwh/t for fresh (primary) ore. These first results provide a very solid foundation from which to carry out further optimization of the metallurgical flow sheet for the Sartenga Copper-Gold Project. 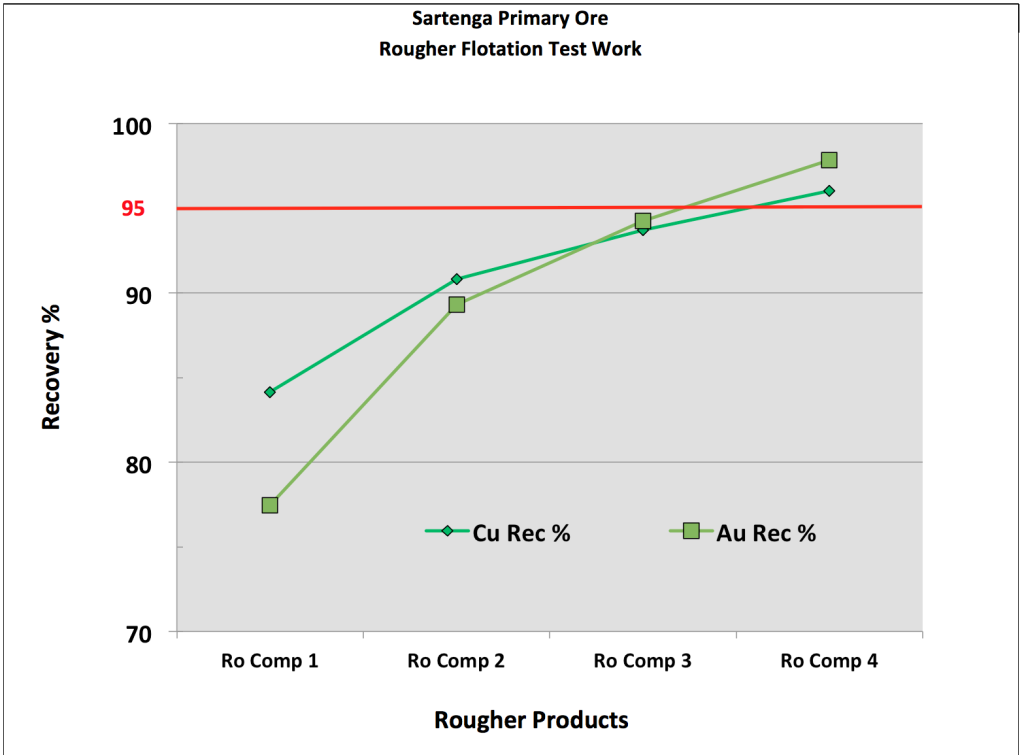 The Sartenga South prospect is 4km southeast of the Sartenga copper-gold project, and was highlighted by the original 800m by 200m regional auger program covering the entire Sartenga permit. An infill auger program on a 200m by 50m sample spacing was completed in December 2012 and January 2013, which further highlighted a northeast – southwest mineralised trend, which was subsequently followed up with an aircore drilling program on 400m spaced lines across the most anomalous auger results in June and July 2013. Mineralisation at the prospect is more typical gold only style. The best results from aircore drilling to date include 20m at 2.52g/t Au from 36m in SAC1237. The most recent aircore intercepts are shown below. 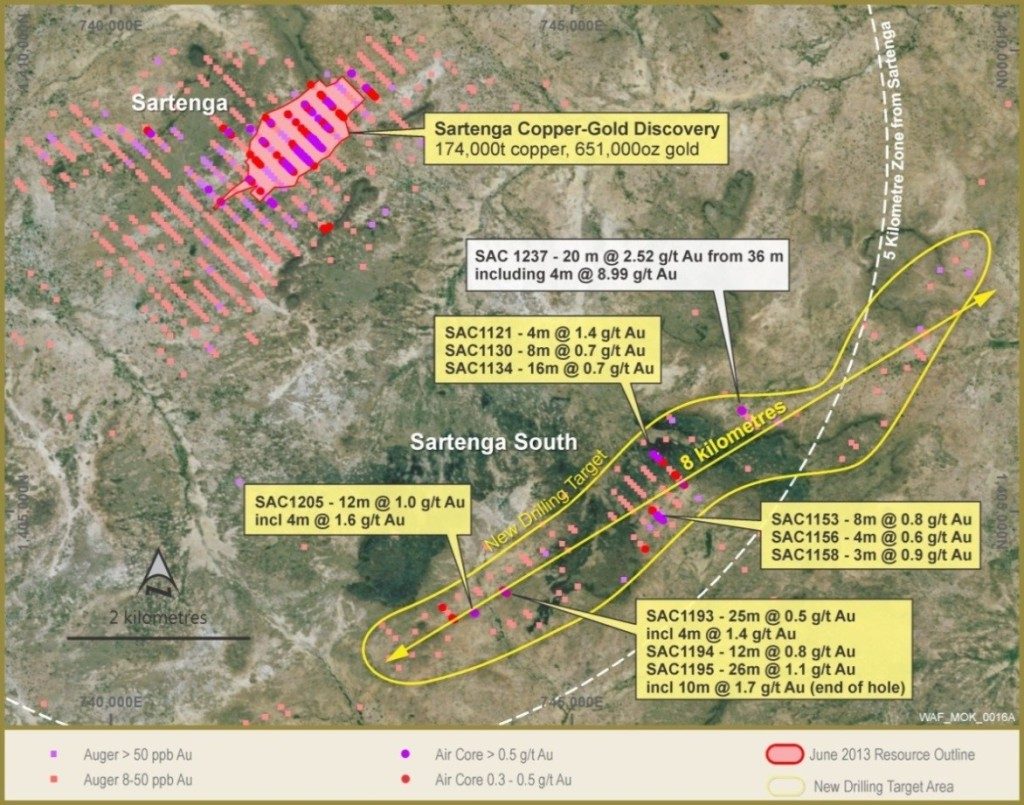 The Moktedu prospect is located less than 20km north of the Sanbrado Gold Project. The prospect covers 10km of strike and is confined within a northeast trending regional shear. The prospect is also 2km northeast of Orezone Gold Corporation’s (TSX: ORE) Bomboré gold deposit and encompasses portions of the Zam, Zam Sud and Goudre permits.

High-grade RAB results from West African’s 2011 drilling at the prospect over a strike of 3km are shown below.

Follow-up work was carried out during the 2011-2012 field seasons; this work included aircore, RC and diamond drilling over the central 2km portion of the prospect. 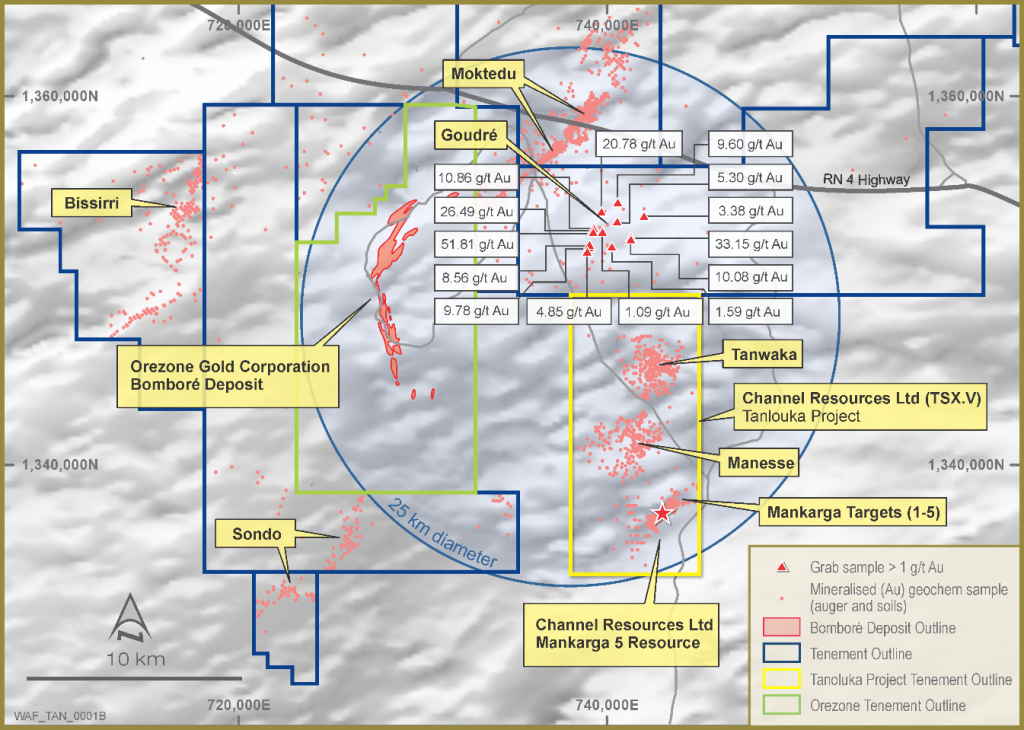 Significant results for shallow aircore, RC and diamond drilling are shown below.

Deeper diamond and RC drilling focused on the central portion of the Moktedu auger anomaly and targeted depths between 100m and 150m.

The Meguet and Fatmatenga prospects are located in the northeastern corner of the Zam permit near the town of Meguet, some 25km northeast of the Sanbrado Gold Project. Auger drilling was completed over Meguet and Fatmatenga as part of the regional auger programme covering the northern parts of the Zam permit on a 400m by 100m sample spacing. A further infill auger programme was carried out on a 25m by 100m sample spacing and delineated northeast and east-northeast mineralised trends.

WAF completed drilling across the prospects – the best RC and diamond drilling intercepts are shown in the table below. 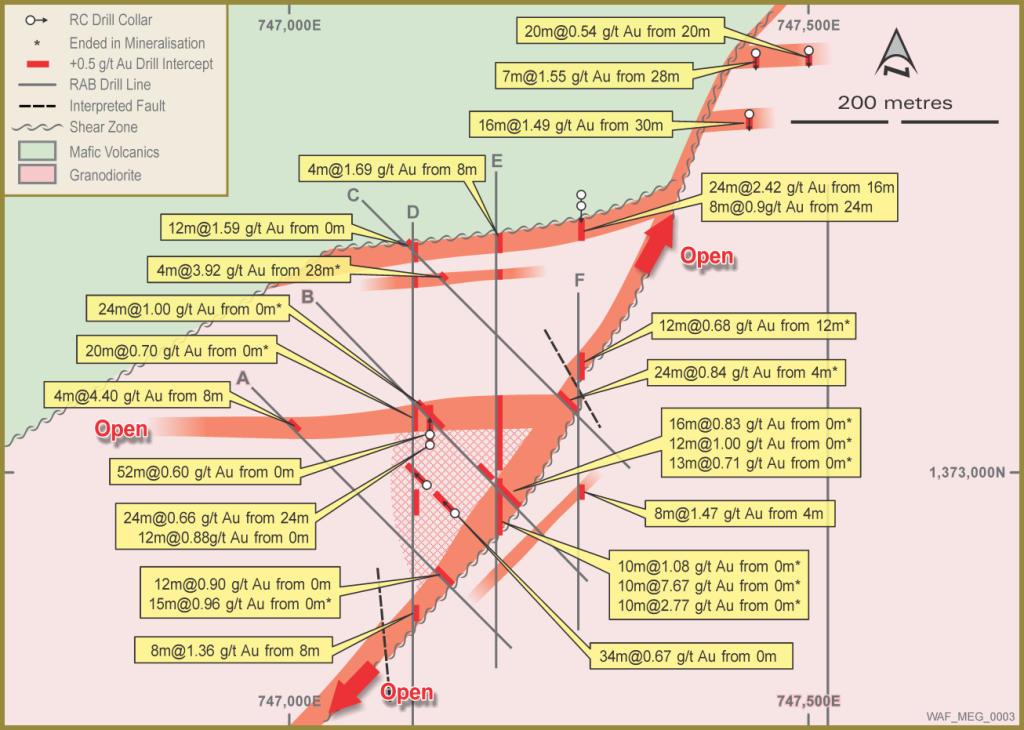 The Comoe Gold Project is located on the Birimian Banfora greenstone belt, 430km southwest of the capital Ouagadougou. The Banfora greenstone belt has been lightly explored to date in Burkina Faso, but contains significant deposits including Barrick’s +10Moz gold Tongon deposit in Cote d’Ivoire. The Comoe Gold Project covers a classic granite-greenstone geological setting and is comprised mainly of sediments, volcanics and granites.