West African Resources Limited is transitioning to gold production following first gold poured at its Sanbrado Gold Project in Burkina Faso on 18 March 2020. Sanbrado is expected to produce more than 300,000oz gold in its first year of production and an average of 217,000oz a year in its first five years at AISC of less than US$600/oz.

Sanbrado has an initial 10-year mine life, including 6.5 years of underground mining. Strong early cashflow and a rapid payback of capital at US$1300/oz gold.

An optimised feasibility study for Sanbrado completed in April 2019 at US$1300/oz confirmed:

There is potential to further extend the mine life at Sanbrado with discovery of additional mineral resources. Regional exploration opportunities are outlined in the Exploration section.

The Sanbrado Gold Project is 90km east-southeast of Ouagadougou, the capital of Burkina Faso. The Project covers an aggregate area of 116km². West African has a 90% interest in Sanbrado, with the Government of Burkina Faso holding a free-carried 10% interest.

Sanbrado has six years of underground reserves, with potential of depth extensions. TAN18-DD228 was drilled 200m beneath the current underground ore reserve and returned 25m at 15 g/t Au from 862m including 5.5m at 40.4 g/t Au. The project currently has just over 10 years of open-pit ore reserves.

Burkina Faso Ministry of the Environment, Green Economy and Climate Change approved an updated Environmental and Social Impact Assessment (ESIA) and Resettlement Action Plan (RAP) for the Sanbrado Gold Project in April 2018. Sanbrado will be operated to both Burkinabé and internationally recognised environmental and social standards, in particular the Performance Standards of the International Finance Corporation (IFC). The updated ESIA reflected the proposed processing change from heap leach to carbon in leach extraction, and addition of underground mining to the overall mine plan.

The Council of Ministers of the Government of Burkina Faso also approved changes to the original mining permit for the Sanbrado Gold Project, encompassing revised mining and ore processing methods, detailed in the June 2018 updated feasibility study. The updated mining permit approves changes to include underground mining in addition to open pit mining and approves using the carbon in leach (CIL) processing method.

In July 2019 West African announced approval of the Mining Convention for Sanbrado as the final major permitting milestone. The Mining Convention was issued in accordance with the 2015 Burkina Faso Mining Code, details of which were reported in the Feasibility Study release (ASX 16/4/2019) and in the NI 43-101 Technical Report dated 25 March 2019. The convention is valid for the current 10-year mine life and can be renewed for additional of five year periods.

Sanbrado is located within a northeast-trending volcano-sedimentary belt that is bounded to the east by the Markoye Fault, one of the two major structures subdividing Burkina Faso into three litho-tectonic domains. The Sanbrado deposit is associated with the Lower Proterozoic system of the Birimian (2.1-2.2 billion years) comprising granites, metavolcanics and metasedimentary rocks.

Gold mineralisation in the project area is associated with shearing, quartz veining and silica, sulphide and carbonate-albite, tourmaline-biotite alteration. Gold is free and is mainly associated with minor sulphides including pyrite, chalcopyrite and arsenopyrite. 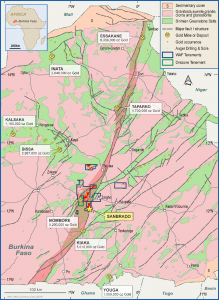 Note: Due to rounding, numbers presented throughout this document may not add up precisely to the totals provided and percentages may not precisely reflect the absolute figures.

Information that relates to exploration results, exploration targets or mineral resources is based on, and fairly represents, information and supporting documentation prepared by Mr Brian Wolfe, an independent consultant specialising in mineral resource estimation, evaluation and exploration.  Mr Wolfe is a Member of the Australian Institute of Geoscientists.  Mr Wolfe has sufficient experience which is relevant to the style of mineralisation and type of deposit under consideration and to the activity which he is undertaking to qualify as a Competent Person (or “CP”) as defined in the 2012 Edition of the Australasian Code for Reporting of Exploration Results, Mineral Resources and Ore Reserves (the JORC Code).  Mr Wolfe has reviewed the contents of the news release dated 22 June 2018  and consents to the inclusion in this announcement of all technical statements based on his information in the form and context in which they appear.